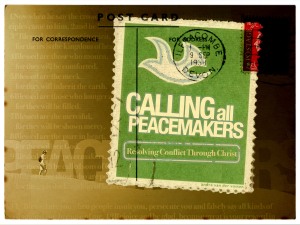 Perry Noble gives some helpful advice on how to be deal with conflict in our lives.

#1 – Email DOES NOT WORK!  (This would also apply to texting as well as any form of social media!)

When conflict use to arise with me and someone in the office I used to walk to my desk, log on to my computer and fire off an abusive email, several problems with this…

#2 – Handle Conflict Quickly – The Bible is VERY clear in Ephesians 4:25-26 that we are not to allow the sun to go down while we are angry.  If we allow something to fester inside of us what usually comes out of that is NEVER pretty.

#3 – Always Assume The Best About The People You Work With – If you don’t get anything else in this article then PLEASE get this, LOVE ALWAYS ASSUMES THE BEST ABOUT SOMEONE…ALWAYS!  If you hate/can’t stand the people you work with then THE BEST thing to do is to begin to ask the Lord, “what is wrong with MY OWN heart?”

#4 – Remember that Email Does Not Work!

#5 – Stop Expecting People To Read Your Mind – Often times people have said something hurtful to me that they did not perceive as hurtful.  I would become angry with them and actually tell myself, “well, they should just know that hurt me!”  NEWS FLASH – THEY DON’T KNOW, and they won’t know unless I am man enough to look them in the eye (because email does not work), assume the best about them (which automatically assumes they didn’t mean to hurt me) and CALMLY walk them through why what they said wounded me.

#6 – Stop Waiting For Them To Approach You – If you know there is conflict and you know there is a problem to be solved but you are “waiting on the right time” or “waiting on them to come to me” then I would encourage you to read what Jesus said in Matthew 5:23-24.  Maturity is when a person is willing to seize responsibility instead of just waiting on something to happen.

#7 – Never, EVER Go Public When You Have Not Even Attempted To Talk In Private – Too often people take their conflicts online when they have never even attempted to handle them in a private matter (sort of goes against what JESUS actually said in Matthew 18:15 as the first step in dealing with conflict!)  People are way too quick these days to read/hear something that someone says and automatically fire off a tweet or blog post without ever attempting to have a conversation with the person that they assume “got it wrong,” causing them to feel like they need to be the savior of the world by jumping to conclusions and making accusations about things that they actually have zero knowledge of.

#8 – And finally, do not forget that Email does not work!

Here is a great list by Perry Noble of “Ten Facts Men Should Consider About Their Wife!”

#1 – Before she was your wife she was God’s daughter…and He is VERY concerned about how someone treats His girl!

#2 – Women are responders, so if there is friction/conflict in the relationship she is most likely responding to something that is off center…and it is going to take an actual conversation where you use words to figure out what it is.

#4 – One of the biggest questions that a woman is always asking of her husband is, “can I trust you with my heart?”  And the answer to this question is not simply declared but rather demonstrated over time.

#5 – Every word you speak has meaning to your wife…and HOW you say those words carry even more meaning.

#6 – No woman responds well to condemnation…and if we are supposed to love our wives like Christ loves the church, and there is NO condemnation for those who are in Christ (Romans 8:1) then we MUST watch our words carefully.

#7 – It is a spiritual impossibility for an angry husband to love his wife like Jesus loves the church.

#8 – Your wife LOVES to know you are thinking about her during the day.

#9 – Surfing the internet or playing games on your smart phone while she is sitting next to you on the couch is NOT romantic.

As we begin 2012, Perry Noble gives us “7 Reasons You May Never Accomplish Something Significant.”

1. Procrastination! (Remember, procrastination is assassination on the amazing future God has for you – James 1:22!)

3. You are more obsessed with what others think about you rather than what Christ thinks about you! (See Colossians 3:2-3, Galatians 1:10)

4. You do not understand the fact that God’s Holy Spirit lives inside of you (Ephesians 1:13-14) and has gifted you and is calling you to do something greater than you could ever imagine (Ephesians 2:10, Ephesians 3:20)

5. You are afraid (see Isaiah 41:10) – and remember, anyone who ever accomplished anything significant for Christ had to take a significant step of faith (Hebrews 11:6!)

6. You believe the lie from hell that says you are an accident when Scripture says that God custom designed you (Psalm 139:13-16) and that you were clearly created on purpose, with a purpose and for a purpose.

7. You are obsessed with things that have ZERO significance when it comes to eternity (I John 2:17).

You can find this article and others like it at churchleaders.com.