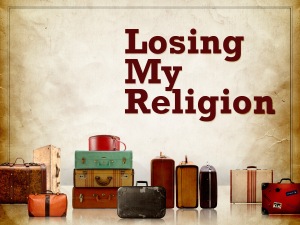 As I go about my day, I often ask people what they believe it takes for someone to get to heaven. Over the years I have received a multiplicity of answers—be a good person, help the poor, don’t break God’s rules, or just go to church. All these answers rely on human works to obtain right standing before God. The truth is none of these will ever move us one inch closer to heaven.

Sometimes human works and the gospel look an awful lot alike; however, the difference between the two are worlds apart. In a recent post J.D. Greear clearly explains what the gospel can do that human works (religion) cannot.

Chapter 9 of Hebrews is all about dealing with guilt. The author explains that the entire Old Testament system was set up to deal with guilt, though it was powerless to do the only thing we needed it to do: purify our consciences. Religious rituals only cover sin, they cannot change the heart. Christ, to whom all the Old Testament points, is able to transform us in 3 ways that the old Temple, and, in fact, no religion, can:

1. From guilt to purity.

Hebrews 9:14 says that the blood of Christ “purifies our conscience.” The tabernacle sacrifices only ever served to cover guilt, but they could never remove it. The blood of Christ takes the penalty of guilt away forever, because through his death Jesus absorbed the penalty of sin—death—into himself. As Charles Spurgeon has said, God would be unjust to punish us for our sins, because then He would be requiring two payments for the same sin.

The forgiveness now available to us because of Christ’s death is more than a mere waiving of penalty, however. Our guilt has not only been removed, but has been replaced with purity, with love, with acceptance from the very God of the universe. In response to our sin, forgiveness says, “You may go.” The gospel tells us, “You are cherished; you may come.”

2. From dead works to loving service.

Again, in Hebrews 9:14, the author tells us that the blood of Christ purifies us “from dead works to serve the living God.” Religion is filled with all kinds of works, various attempts to get God to approve of us. These works are dead, because they are not love for God, but love for self. We perform for God not because we love Him but because we want something from him. If I were to take my friend out to dinner because I know he has a beach house, it’s not done out of love. I am making an investment: sixty bucks for a nice meal and I can score a week at the Outer Banks!

As John Newton, the author of Amazing Grace, wrote in another of his hymns:

Our pleasure and our duty, though opposite before, Since we have seen His beauty, are joined apart no more. To see the Law by Christ fulfilled, to hear His pardoning voice, Transforms a Slave into a Child, and Duty into Choice.

Religious ritual cannot take away sin. The Jewish people made a tragic mistake. They took the symbols of sacrifice and started to treat them like they were the real thing, like adherence to religious ritual could actually take away sin. People do that today when they think that certain religious rituals (like taking communion, regular church attendance, tithing, or saying a ‘Hail Mary’) can take away their sin. At their very best they can merely covering sin, like spraying yourself with perfume instead of taking a bath. That may work a few times, but soon enough the stench permeates the perfume. The blood of Jesus does not cover our sin with some kind of religious cologne, it removes our sin and transforms our hearts. Apart from faith in Christ, religious rituals are dead works. Alive with faith, religious activity becomes loving service.

3. From dread of God to longing for Him.

As we see in Hebrews 9:28, the gospel replaces the sense of dread we used to have before God with a deep sense of longing. When we fear judgment, the thought of being in God’s presence is dreadful. The sacrifice of Jesus, however, assures us that judgment is gone, and in its place are God’s love and acceptance. When we realize this, God’s presence becomes something we desperately crave.

I see this with my kids. When I come home from a trip, my four children will rush out to meet me at my car. My four-year-old daughter will immediately start to give me the details of everything that happened while I was away. It doesn’t make much sense, since she’s four, but she knows I’ll listen eagerly. They know that I long to be near them, so they long to be near me. When they think I am angry, however, or in a bad mood, they stay away. Many people are like that with God. They dread being around Him because they fear displeasure or judgment.

The gospel gives us the confidence of a beloved child before God. Rather than fearing His judgment, we sense only approval and tenderness. We cry “Abba, Father,” and we begin to long for Him.