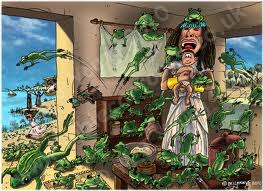 Do me a favor—take a minute and read Exodus 8:1-15. In this passage, we find the account of the second plague God brought on the Egyptians because Pharaoh would not let the Israelite people go free. Pharaoh was considered the “go between” for the people and their host of gods; therefore, he wasn’t going to let some lesser god of slaves come into his kingdom and tell him what to do.

Can you imagine what the plague of frogs was like? Pharaoh is in bed sound asleep, when all of a sudden, he is awakened by someone touching him on the chest. He quickly opens his eyes and looks around the room to see who startled him. Seeing no one he tries to go back to sleep, but before he can close his eyes there it is again—thump, thump, thump. He throws the covers back and underneath are dozens of frogs. He jumps out of bed only to find hundreds of frogs all over his royal bedroom. He reaches for his robe only to find a frog in the pocket. He can’t even get his slippers on because of the frogs inside. Just as he is ready to call out for the guards, the doors to his room flies open sending frogs skidding across the tile floor. Rushing in are his court officials with a couple of giant brooms try to sweep the slippery, green nuisance out-of-the-way.

“Oh King!” they cry out “You will never believe what is happening all across your kingdom! There are frogs everywhere! It is just as Moses said it would be.” They begin painting a bleak picture of Egypt—there were frogs in homes, barns, fields, kneading bowls, coffee cups, in the streets, and courts. They were everywhere! Without a question, Moses’ latest curse is one big green disturbance.

Pharaoh is not going to be outdone by the leader of slaves. He calls his royal magicians in to remove the frogs; however, their incantations only bring up more frogs. Now the situation is worse than ever. Pharaoh is determined not to be manipulated by Moses or his God, so he tries to live with this slippery inconvenience. However, after many sleepless nights and days filled with croaking frogs Pharaoh finally breaks. “Moses!” he cries out in anger. “Get Moses in here now!”

When Moses arrives Pharaoh is quick to the point, “Moses, I will let your people go, but you have to get these frogs out of here!” Then Moses asks a strange question, “When do you want the frogs to leave?” When? My reply would have been simple, “How about yesterday!” But Pharaoh’s answer has always made me scratch my head—he said, “Tomorrow!” For days, and possibly weeks he has been dealing with this hopping nightmare and when given the opportunity to get rid of the problem he decides to spend one more night with the frogs.

I have never been able to figure out why he would want to wait one more night. When the solution was right in front of you why not say, “NOW!” But instead, he decides on tomorrow. I don’t really think we can be too hard on old Pharaoh, because we’re not too different today. In spite of all the proof that certain personal preferences in our lives are really harmful, we still choose one more night with the frogs. When we are told that our habits could harm us or others mentally, physically, emotionally, or even spiritually for the most part we just keep on doing what we want. We figure we’ll give up this habit some day.

The problem of spending one more night with the frogs is where it eventually takes us. That one night takes us to a doctor’s office trying to find out how to live with a terrible disease. Or it may lead us into a lawyer’s office fighting over our possessions in a bitter divorce. It may direct us into a physical therapist’s office where we are trying to learn to walk after a terrible accident. One could find himself sitting in a big lonely house because your kids will no longer put up with your childish behavior. Or, in the worst case scenario we find ourselves standing before God and hear the most frightening words ever uttered, “I have never known you. Depart from me into eternal punishment.” You see, one more night with the frogs may not seem like that bad of an idea, but eventually you have to deal with the consequences of your decisions—payday is coming.

Pharaoh could have gotten rid of the frogs that day; all he had to do was determined in his heart that they needed to go. He had to swallow his arrogant pride and ask Moses, the great deliverer, for help. Instead, he figured enduring one more night wouldn’t be that bad. The end result was piles of rotting, smelly frogs all over his kingdom. His pride was still controlling him, and in the end, the cost was more than he could have ever imagined.